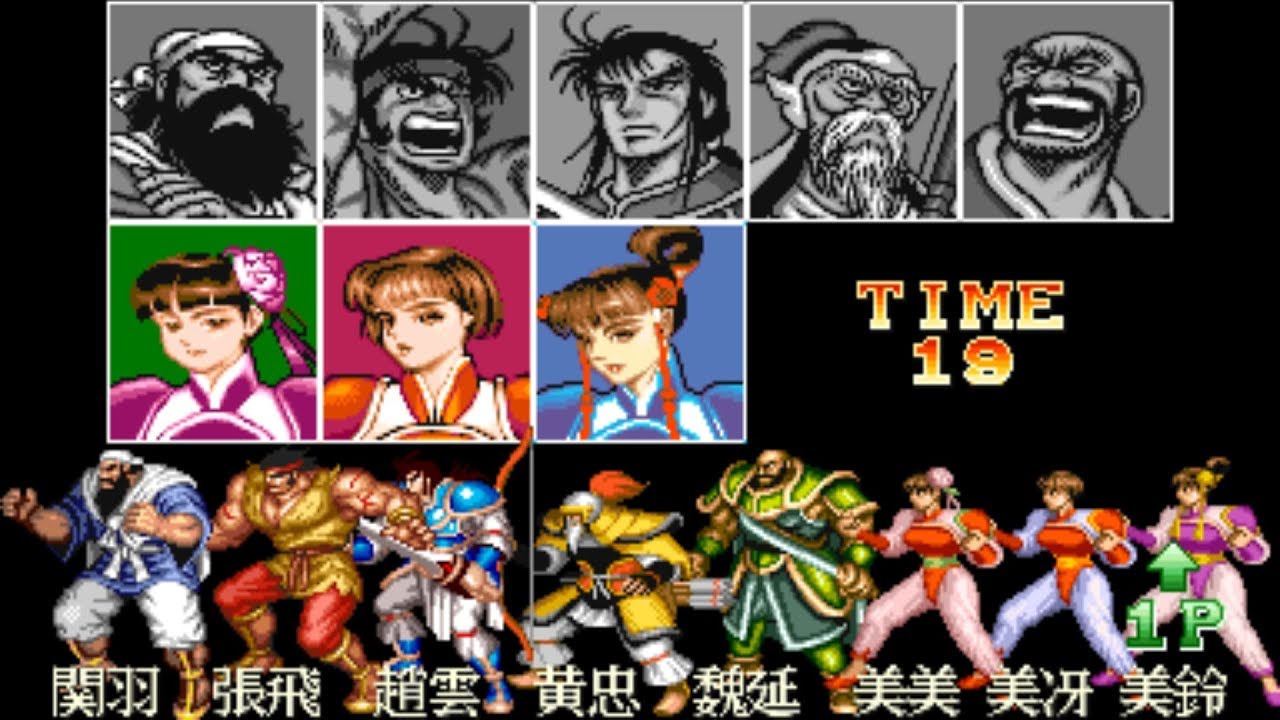 This is a full play-through using Mei-Ling, Mei-Ya and Mei-Mei in an alternative version of the Arcade version of Warriors of Fate / Tenchi o Kurau II. Read on below for more information…

Mei-Ling, Mei-Ya and Mei-Mei are the enemy mid-bosses you have to fight after you complete Round 3. They also make appearances as regular enemy characters in Rounds 8 and 9. In the normal version of the game, all three are unplayable characters. In this alternate version however, they can be selected and controlled by a human player.

They are also known as Izia, Arika and San-Jin (in the order I list them above) in most non-Japanese versions of the game.

In this playthrough, I switch between them every time I need to Continue.

The first thing that should be noted is that despite them looking different between them graphically-wise, all three characters play exactly the same.

If there ever was a “good standard” to convert an enemy character into a playable character in WOF, then you’re looking at it with these three. The person who did it has, as follows:

—- Incorporated all the moves from the CPU enemy versions of them (even their Knives Throws), with some differences in the way they hit plus some extras such as the grapples. In fact, they seem to have MORE moves than the regular characters!

—- Implemented a super jump for them where during it they can be guided in all directions before landing.

—- Implemented their ability to pick up and use weapons.

—- Implemented their portrait images and gameplay sprites to appear on the character select screen.

—- Implemented their icons and names to appear on the lifebar and in the lifebar character select (after you continue), as well as the Score Ranking screen.

—- Implemented their sprites to appear in some of the story cut-scenes.

—- Implemented them appearing on the Continue screen, however this is just a gameplay sprite/frame of them.

A good alteration would not be complete without the little minor faults that come with it, as follows:

—- They cannot mount/ride the horses, but this is perfectly understandable and I would not consider this a fault at all.

—- During the game’s story cut-scenes, sometimes their portrait images are flawed in colour. This is most likely due to their portrait replacing am original regular character portrait for the scene.

—- In the credits “flashback” roll, the colour palettes on their sprites are flawed.

—- The “unwanted yuri” animation during the ending cut-scene at 1:01:56. I wonder if this was intended by the creator or just a coincidence that these sprites were used at that moment in time?

This is a scrolling beat-em-up by Capcom which is based on the Tenchi wo Kurau manga, derived from the historical novel Romance of the Three Kingdoms.